AGAIN WITH THE INDIAN OCEAN He goes on!
Once again I have to take a stand on the soapbox of American Foreign Policy.

We have been blessed by having two wide oceans on either side of our nation. The Atlantic and The Pacific Oceans had never been unified into integrated trading systems until the European Expansion beginning 500 years ago. This was not the case with the Indian Ocean.

When the Portuguese rounded Africa in the 15th century they entered a pre-established complicated and self-contained trading system. Predominantly Arab but also Mandalay dhows plied this third ocean that laps upon no American shore. The Portuguese cracked the Muslim lock on the local and European Trade. From them, the torch was passed to the Dutch, French and eventually the British. Until December of 1941 the Indian Ocean was a British Lake, with some Dutch and minimal vestiges of Portuguese and French power. This ended with WW2. Unlike the Atlantic and Pacific without any previous history of transoceanic trade and international relations, the Indian Ocean did have such a pre-European system.

The five hundred years of European intrusion into the Indian Ocean may be seen as an aberration of history. An evanescent high water mark of Western Power, it now may now be reverting back to its “normal” autonomous status.

With the Indian Ocean no longer a Western Lake, America’s efforts to maintain the status quo ante of WW2, are self-defeating. We are hemorrhaging our wealth, and over-utilizing our naval assets in this attempt at maintaining Three Ocean preeminence. It is no longer affordable.

By attempting to be supreme in the three non-polar oceans we are actually weakening ourselves in the two oceans that are vital to our National Security.

We need to get our carrier task Forces out of the narrow seas at the edges of the Indian Ocean. Asymmetric warfare in close-in fighting was demonstrated to be unacceptably costly in the British experience of the Falklands War. If Exocets inflicted such damage in the 1980’s imagine what thirty years of advances in missile technology may have accomplished! And we have multi-billion dollar task forces in range of land-based missiles??

The United States Navy was designed as a blue water force, but is being deployed in the narrow seas of the Indian Ocean as a Coast Guard. Meanwhile China is amassing increasing naval power, and is demonstrating a desire to break out into the Blue Water Pacific. This will occur if we do not quickly realize that the Indian Ocean is like flypaper to our military.

The Chinese identify what they term the First Island Chain. It is this chain that hems them in, and prevents them from assuming their “rightful” place as the major power of the Western Pacific. It is also this chain that prevents California from being our border with China.

We must secure the First Island Chain: Japan, South Korea, Taiwan, the Philippines and eastern Indonesia. Once China penetrates beyond this chain, Australia and New Zealand will be faced with the uncomfortable choice of following their commercial interests or their strategic military interests, as well as their inclusion as integral parts of The West.

We simply do not have the ability to be supreme in the Indian Ocean and the Pacific. It is the Globalists’ interests that keep us in the Indian. It will be in American Interests and in the interests of the English-speaking settler nations of Australia, New Zealand and Canada to reconfigure our naval strategy from the Indian to the Pacific.

There is little chance of any one single hostile hegemon emerging to threaten our interests in the Indian Ocean. Our interests there are essentially only the secure transit of oil at market prices. There had been the strategic consideration of having the ability of cutting China’s access to essential petroleum products.  However the successful completion of several pipeline projects from the Caspian to China has mooted that point.

India is already flexing its muscle and is likely to be at the core of any future Indian Ocean Security configuration. Indonesia, the Gulf States, even those West African states that are closer than ever to reaching their true potential, such as Kenya, Tanzania, and South Africa, will all have roles to play in the future of the security of the Indian Ocean. The European nations get far more of their oil from the Persian Gulf than us. The European powers or perhaps the EU can partner with India to secure the Western Indian Ocean. With the Indian Ocean left to those who have greater interests in its security and stability than we do, we can once again heave ho into the Blue Water Navy of a Superpower. Let the world be put on notice that the Atlantic from the Faroe gap in the northeast to the Straights of Magellan in the southwest are open to trade from all the world, but only those nations that face the Atlantic have any need for a military presence. Let no nation make vain promises to a Hugo Chavez. No nation will be allowed Naval Operations thought to be inimical to our interests, as we see them; period.

Let the USN be the sharp end of the spear. The Constitution actually makes our standing Army illegal. Of what use is a land army to a nation surrounded by two oceans over which its writ is law? The Marine Corp is enough boots on the ground for a sea power. A Nuclear Capable Air Force ought suffice to deter any would be aggressors. 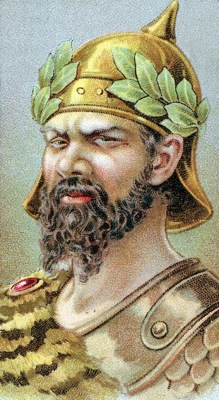